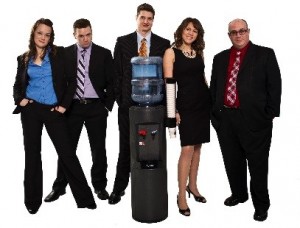 In yet another attempt to ensure that the office water cooler is a refreshing (and peaceful) hydration solution, as opposed to an overwhelming source of office awkwardness (you can learn all about Office Water Cooler Etiquette here), we’ve decided to take a look at the different kinds of people you’ll often find huddled around the office water cooler throughout the work day.

Not only will you be more prepared to engage with your office co-workers by reading up about these individual office water cooler archetypes, but you’ll also know when to continue on your mission for a cup of chilled and refreshing water, and when to walk right passed.

Many of the people who use the office water cooler see it as an opportunity to talk you ear off, however none so more than the office Ranter, who is capable of talking at a speed never-before recorded when it comes to human vocal cord capabilities. Getting cornered into conversation with the Ranter will see you somewhat doe-eyed as you attempt to gleam some fragment of meaning between the mumblings about office politics, interspersed with unintelligible personal anecdotes and frequent fragments of somewhat maniacal laughter.

While the Ranter is probably quite decent at what he does and, when it comes down to it, a friendly individual who means no harm, ending up in one-on-one conversation with him or her will see you  stuck for the good part of several hours. If you do ever attempt to fill up your water bottle at the office water cooler with the Ranter nearby, it’s best to use the safety of numbers – only ever engage with the Ranter in groups of three or four people, so that when you can take no more of their well- intentioned ranting, you can safely slip away without fear of offense.

The Golden Oldie has worked at your company since the day it started. He or she was there when you were just an image on an ultrasound screen. As the old-timer of the office, the Golden Oldie is a class-act – ever dressed to the nines in a suit that’s impeccably pressed, as he or she greets you in the usual way, inspiring mental images of your grandparents as they make their way to their cubicle. The Golden Oldie is the master of small talk, ever ready with an enquiry as to your plans for the weekend or a comment on the current state of affairs when it comes to the weather.

With a self-assured manner that comes from many years in the business, the Golden Oldie is a delight to encounter when making a stop at the office water cooler. While he may not know the ins and outs of the latest advances when it comes to technology, his years of experience have resulted in the ability to regale anyone who will listen with a mixture of highly-amusing and incredibly-fascinating memories of his time spent on the job. Should you come across the Golden Oldie, then we suggest you get comfortable with a cup of chilled water in hand as you ride the rollercoaster of his memory on a unique trip through time.

The Worry-Wort is the kind of individual that makes you tired when just watching them. Their nervous energy precedes them in a similar manner to the dark clouds that precede a storm. Constantly pacing around the office, wringing his or her hands, the Worry-Wart frequently mumbles in high-pitched bursts of incoherent and loosely-strung sentences. When confronted with the Worry-Wart, you can’t help but feel as if you’re first in line as a potential eye-witness to what could be the very first case of a human being spontaneously combusting.

Finding yourself in the company of the Worry-Wart will have a profound effect on you as their irritatingly contagious sense of concern over everything slowly soils your sense of well-being. Coming out of this conversation, you’ll feel somewhat similar to how we imagine a person might feel using purely their sense of smell to detect the whereabouts of a potentially life-threatening mine in a field of knee-high grass. Your best bet is to simply fake compliance with their every worry: nod your head, raise your voice, pull your hair out; do whatever it takes, because if there’s one thing a Worry-Wart can appreciate, it’s the presence of another worrier.

The Big Little (Wo)Man is a pitfall of the modern-day workplace. You can bet that no matter how many times you encounter this individual, he or she will not remember your name (and won’t feel embarrassed at asking you again and again what it is), while badly pretending to listen to what you have to say before launching into a monologue that exemplifies self-indulgence of the highest degree.

Annoyingly, the likelihood is that the Big Little (Wo)Man will probably be in a position superior to you, which means that you run the risk of being fired purely on the off-chance that he or she senses your contempt. Meaning that if you ever find yourself sharing office water cooler space with the Big Little (Wo)Man, you’d best do yourself a favour and keep quiet, while you concentrate on keeping a congenial grin plastered to your face while weathering the self-indulgent ramblings of this self-proclaimed office hot shot.

There are so many different types of people in the world, and indeed, in every office. While we can’t predict every type of person that you’ll come across, we can provide you with one consoling thought: with unlimited access to chilled water from the office water cooler, you could certainly do worse when it comes to location should you ever find yourself trapped in conversation with one of the above mentioned office archetypes.

Gladly take note of that, and drink deeply. Good luck.