This week we received another series of photos from an American friend who – while sorting out his life long possessions for a yard-sale- stumbled upon a glass great bear water cooler bottle.

As previously covered in a series of blogs on The Water Delivery Company,  The Great Bear Company is one of the oldest water cooler brands in the USA. The company was founded in 1888 and is headquartered in Greenwich, Connecticut. Great Bear Spring Company operates as a subsidiary of Nestlé Waters North America Inc.

As the water cooler market was really only established in the UK in the early 1980’s there are few glass water cooler bottles in circulation. Our collection has all been imported from the USA, and mostly from the backyards of American consumers.

They are often highly designed and this glass great bear water cooler bottle is a great example of this. We will follow these photos with more detailed images when we finally import the bottle in July 2013. 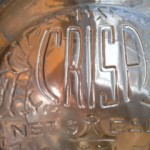 Engraved detail on the bottle 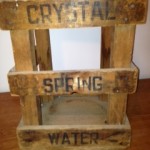 Wooden Crate from the front