The Museum of Water 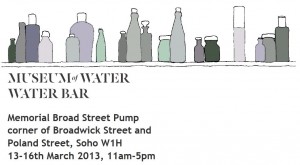 o how did we end up at the Museum of Water this week. Our water scanners are ever active looking across the UK for companies, individuals & charities doing interesting things with water. The “Museum of Water” fitted perfectly.

London artist Amy Sharrocks, has opened up a ‘collection of water’ on the Broadwick Street site where physician John Snow made medical history by tracing the source of a cholera outbreak to a water pump.

Celebrating the pioneering work of medical detective John Snow, the London School of Hygiene & Tropical Medicine and Artakt have commissioned these live artworks as part of an exhibition celebrating his work and legacy.

John Snow (1813–1858) traced the source of a deadly cholera outbreak in 1850s London to a water pump in Soho, and is considered the founder of modern epidemiology – the study of the patterns and causes of health and disease in populations. His work laid the foundations for better sanitation in the capital and still influences public health research and policy today.

The exhibition, which runs from 13 March 2013 to 17 April 2013. It will feature a jar filled with snowballs and water from the top of Snowdon. And a pop-up ‘Water Bar’.