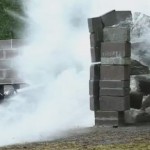 We know water coolers can be vital in the fight against dehydration….but terrorism?

The humble office water cooler bottle is being deployed in the latest military hardware to deal with hostage situations and terrorist threats.

Cardiff-based BCB International has developed the Wall Breaker: a bizarre cannon that fires the water bottles into buildings at high speed.

The firm is already exporting it to military and security forces worldwide.

The pneumatic device, which can be used in hostage rescues, fires water-cooler bottles at 300m (984ft) a second to break into buildings.

It fires a charge, a big barrel of water – and that impact can smash through a double layer breeze-block wall”

Jonathan Delf who runs the company’s marine projects, explained that the Wall Breaker has advantages over traditional methods of gaining entry to buildings and structures.

“Security teams, counter-terrorism officers might use explosives. If you’re trying to rescue a hostage, that’s pretty dangerous because the explosion and the debris can cause damage,” said Mr Delf.

“Our system uses compressed air and it fires a charge, a big barrel of water – and that impact can smash through a double layer breeze-block wall”.

“What’s great about using water is that the casing shatters and it just sprays out. It means security teams are much closer to the point of entry, giving them vital seconds,” Mr Delf added.

The Water Cooler Company knows the value and practicality of water coolers, and we are pleased to see that water coolers can be used for more than just providing water!

Kayleigh Clerkin is a part-time journalist who writes articles for Drinking Waters UK - one of the UK's largest suppliers of drinking water products including water fountains, water coolers, water filters, distilled water and spring water. Add me to your Google+ circles.
View all posts by Kayleigh Clerkin