Fishermen saved by their on-board Watercooler 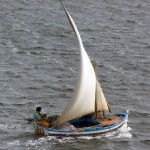 At the end of last month we heard an incredible story survival, of people fighting to stay alive and overcoming the odds- partly thanks to their on-board water cooler. The three friends from Florida, who had left for a fishing trip on 16th May, found themselves in trouble when three huge waves hit their boat without warning, causing it to capsize. When recounting the experience, they said that “there was no time to even put on a life vest”, and the first thing that they could grab before the boat went over, was the water cooler.
The next three days were spent telling jokes to keep morale as high as possible, and rationing the drinking water and Gatorade that was contained in the cooler, until emergency services were able to find them. Once they were recovered, the coast guards stated that they were all lucky to be alive, and had increased their chances greatly by disciplining themselves and their liquid consumption rates. They were returned to land safe and sound, and have recovered well.
Here at the water cooler company we hope that you won’t find yourself in a sticky situation like this, or indeed, having to ration your intake of delicious, cool water. To keep it flowing in your house, why not try a plumbed in water cooler, and see the difference it makes to your family. Get in touch today- we look forward to hearing from you!